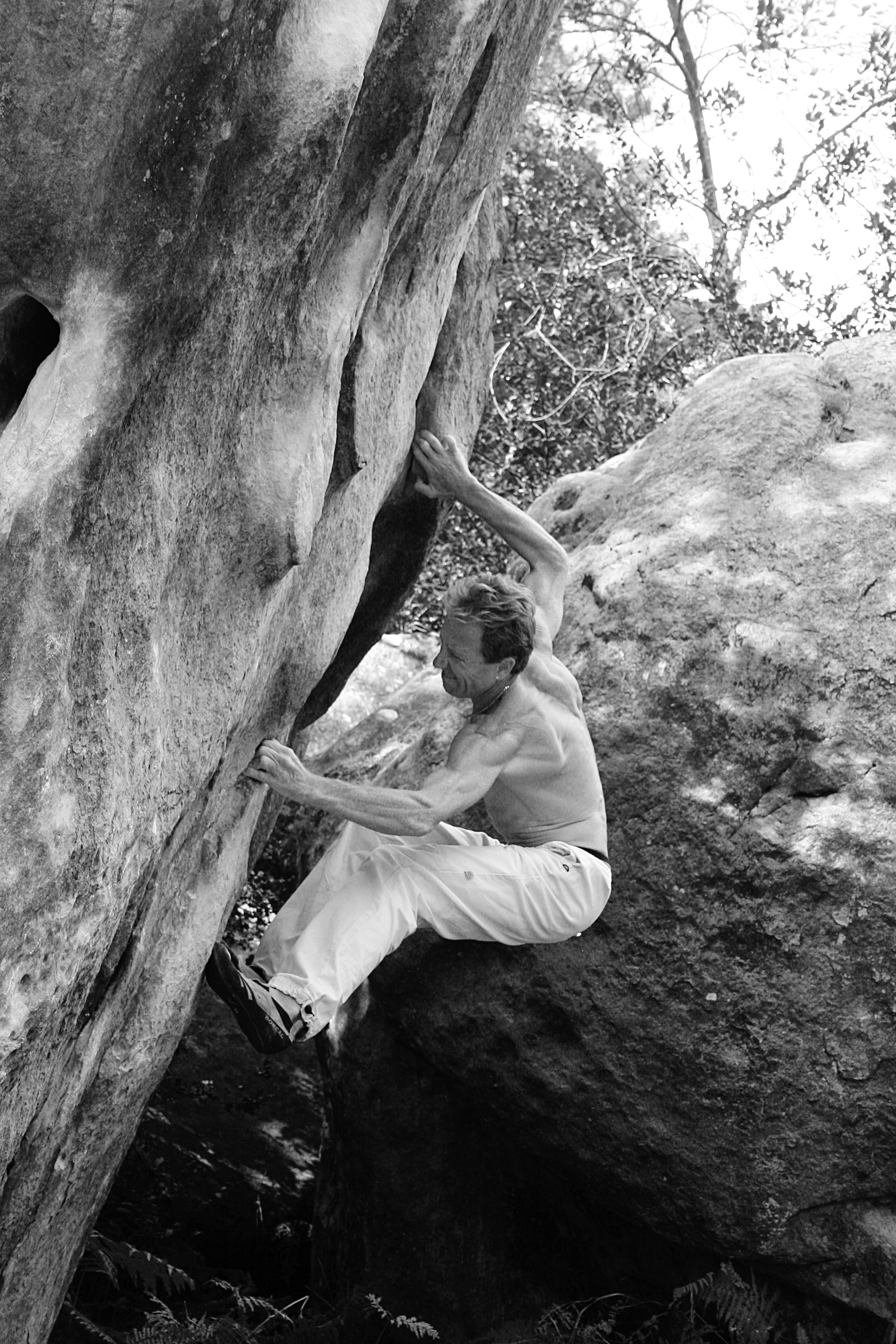 Fontainebleau crazy lover since 1980 with lots of first ascents from 1984 to 2004. International route setter and Instructor since 1995. Responsible of IFSC official route setting commission during 10 years. Coordinator of french bouldering training center in Karma since 2008. In charge of many workshops in Australia, Russia, South America, Canada, Sweden, Spain, Portugal and so on...
Author of many books about Font and My keys to Route Setting. Other passions: Music and kids
Key words : Curiosity, Daring and Joy. Best souvenirs: Still to come...

Meeting people with a passion has built my career path, it’s the most important aspect of what I do. Let me tell you about my friend Mark English. Mark and I met in 2017. Well established, he had a dream: explore a new dimension with his brand. Mark has owned climbing gyms for 26 years, so he buys climbing holds and manages a team of route setters. He has his own climbing hold company called Rockcity. Mark is helping me build this website. We had a chat about some magical memories. 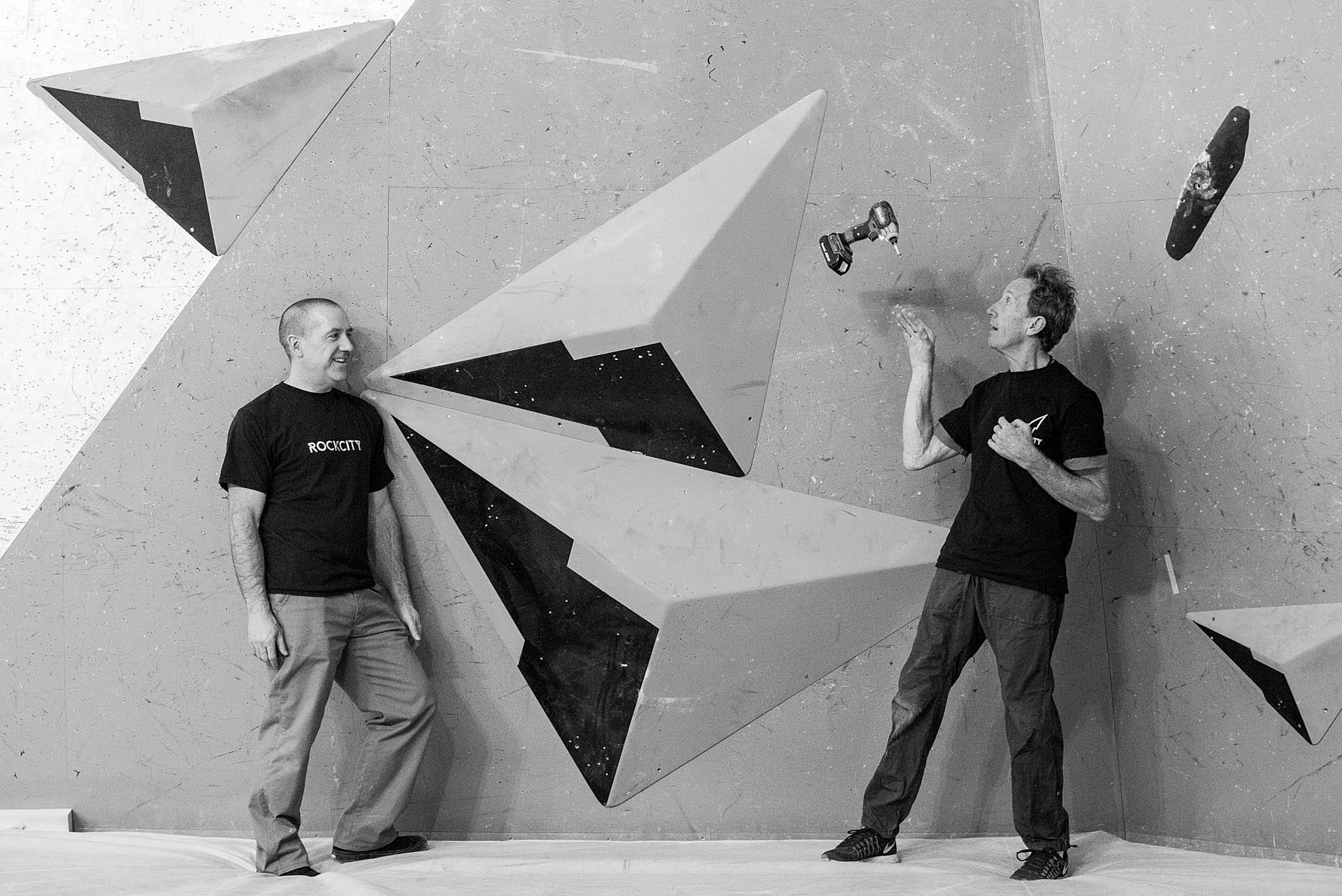 Hey Mark, remember the first time we met, you were a partner of the gym where is hosted the laboratory of move in Karma. Even if I am not shaper, I explained a bit about the constraints of appropriate holds for this matter.
Hey Jacky! Yes, I remember discussing shapes with you at the rear of my van, outside Karma. You said about the idea to make the same shape but in different versions of positivity. That I should go and add some magic. So, with some collaboration we made the Spores and Crobes in Dual Texture. These then were selected for the Tokyo Olympic Games.
Six month later, You'd been let down by the courier three days before the start of a competition in Poland. You came by car all the way from England to Poland with a set of holds for the IFSC European championship!
Yes, the trip to Poland. Rather than let you (and myself) down, I did get in the van and drive three days across Europe to 'deliver'! I see that you have been very open and helpful to me, giving advice, suggesting ideas and tricks for the new holds. ‍ Three months after Poland I am selected for the Olympic Games in two categories! A lot of hard work but a lot of help from my friends. Now I can be of help with this project, share our knowledge and make working fun.

GET YOUR OWN MAGICAL ENCOUNTER WITH JACKY - SCHEDULE A FREE CALL

A FEW WORDS FROM MARK

"I own the Rockcity climbing gym in the UK, I design and build climbing walls and skateparks. I have designed training products previously for S7 and Moon. I am the UK distributor for all the major climbing hold brands, including Flathold, Cheeta, Kilter, Agripp, Expression, Volx etc. I have my own climbing hold company, also called Rockcity.

My ethos for the gym, the hold distribution and the climbing holds is to work with the best route setters, making and supplying the materials for their job, instead of just shaping and selling holds for climbing on. We use a variety of ideas, technologies and with the top route setters we can create our product range."
‍

"As a climbing gym owner, I know how much experience Jacky has and how he can help gym owners and route setting teams, combined with how available Jacky is to anyone who has a passion for climbing."